When Repairs are Better Than Replacements

There’s a certain level of satisfaction to be gained by repairing something – for your wallet and your peace of mind. Often, people try to tell you that replacing a part in a vehicle is the only way to be sure it will work well, but the truth is: a good repair service can do the same or even better for a well-maintained car.

What And When to Seek Repairs:

Take shocks and struts, for instance. While struts are harder to reach and more often than not will get replaced instead of repaired, shocks can go through periods of more intense wear and damage due to road conditions or driving in extreme weather. That said, shocks can last a long time, and that means around 30,000 miles or less on one set of shocks can have you leaning more toward affordable repair services that give their service provider ample time to look at the surrounding parts of the vehicle and ensure an overall smoother, safer ride for you while we’re at it!

Keeping in mind the fact that shock and strut wear or damage can be noticed through a number of issues like excess fluid, braking and turning problems, and an uncentered steering wheel that tends toward slower responses to your turns, it may be advisable that you have your shocks checked on a regular basis. This can certainly be done less often than oil changes, for example, but as leaking fluid or brake issues can have multiple causes, it certainly can’t hurt you to have the person servicing your vehicle check the area in and around the shock absorbers when the opportunity strikes to make sure you don’t run into a situation where your shocks are beyond help after 50,000 miles or more of constant use.

That said, what you want to know is far more simple, I assume:

When you think you know your shocks are bad, it’s easy to feel down considering these questions. But have no fear, because service providers are here for you and your vehicle’s shocks! And just for your peace of mind – it’s rather hard to ignore problems with shocks and struts once they arrive, if only because such a problem can be heard, felt, and seen even during an oil change if the car has to be turned on and moved! Because of this, any “damage” would be self-contained for the most part, and removed entirely at the time your vehicle’s shock absorbers are replaced!

To start with, repairing shocks is actually something that can be done rather easily in your own home – provided you have the tools. The most important part is being able to take apart and check all the components of the shock absorber system – things like the seal can be repaired in short order, but pistons absorber mounts could take a bit more knowledge and time. Because of this, repairing a set of shocks can take 3-4 hours at most, including drying time when you clean the parts to remove oil from them. More complex repairs or multiple sets of shocks and struts can take closer to half a day at times, but testing the repaired or partially-replaced shocks is as simple as applying pressure and seeing if they bounce back slowly or too quickly.

Replacing, on the other hand, is better done around 40,000 or more miles of use in a shock absorber. Doing a repair at that point will just mean doing a replacement less than 10,000 miles later, and could be considered a waste of money and good parts. If you ever wonder about replacing all four shocks at once, this can easily be done and is actually highly recommended! After all, barring unforeseen circumstances, all of the shocks and struts should have encountered the same wear and tear over the course of the same amount of miles. It’s safe to say that if one shock is in need of replacement or repair, the other three likely are, too. But still, for cost-effectiveness the shocks and struts can be replaced in pairs as well. But for the smoothest ride that you can be assured of the safety of, it’s best to deal with your shocks as a set rather than four individual parts. Replacing struts is something that should only be done by trained professionals in a service center due to high tension in the replacement area.

The Cost of the Shock Effect:

And lastly, the cost of these all-important repairs and replacements! Labor in general for a repair or replacement this long will run a few hundred dollars, but a single set of shock absorbers can average at about $150. So, as an example, getting a pair of shocks replaced for you car can be considered a $400 service on average. For such important parts of you vehicle, this is a relatively small price to pay, and you can keep in mind that repairs for shocks and struts will likely be cheaper! I guess you could say it really pays to get your car serviced nowadays! 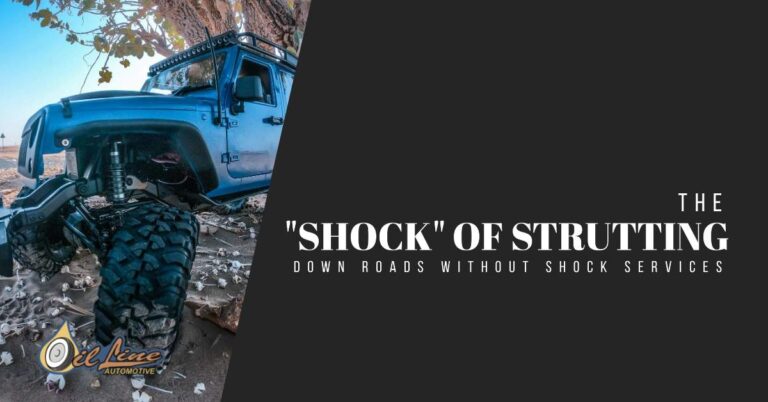 The “Shock” of Strutting Down Roads without Shock Services

Do you know the difference between shocks and struts in your vehicle? Do you know what their primary functions are and the things that you should be looking out for prior to servicing them? For someone who isn’t very familiar with vehicles and their inner workings, these questions almost feel like they’re in a different language! But don’t worry, because those questions can be answered here and now for you before you even have to take your car to get its next oil change. 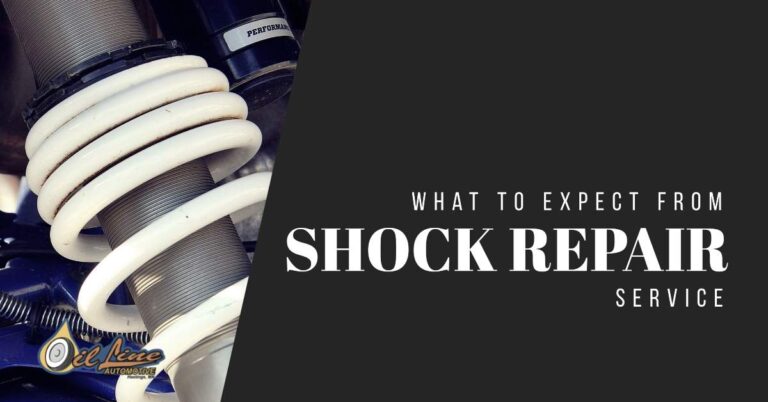 What to Expect from a Shock Repair Service

How do you know when you should repair instead of replace your shocks? Even under normal driving conditions, these shock absorbers will undergo a tremendous amount of stress and rapid movement, which eventually starts to cause wear. Signs of failure will generally become noticeable at around 50,000 miles, depending on road conditions, vehicle performance and